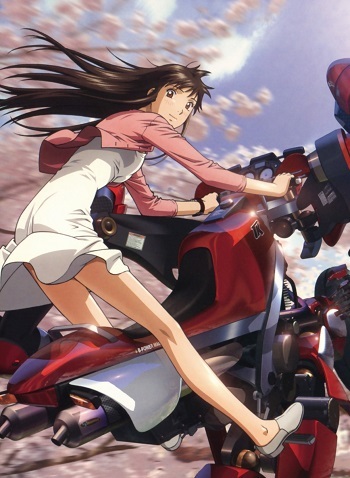 Rideback is a manga written by Tetsurō Kasahara and first published by Shogakukan from 2003 to 2008. It was made into a 12-Episode Anime produced by Studio Madhouse in 2009. In the near future, an organization called the Global Government Plan, or GGP, (known as the Global Government Force, or GGF, in the manga) had taken control of the world. As they maintained order in society, the citizens quietly accepted their existence. However, a smaller resistance group, the Border Military Alliance (BMA) wished to overthrow the GGP and their authoritarian rule.

Following Rin Ogata, a promising up-and-coming ballet dancer, Rideback chronicles her story after she suffered a serious injury and subsequently quit ballet. Years later, during university, she comes across a club building and finds herself intrigued by a transforming motorcycle-like vehicle called a Rideback. She discovers that her unique ballet skills with balance and finesse make her a born natural on a Rideback; as Rin becomes entangled in the government's affairs, she finds herself struggling to come to terms with both herself and the world around her.