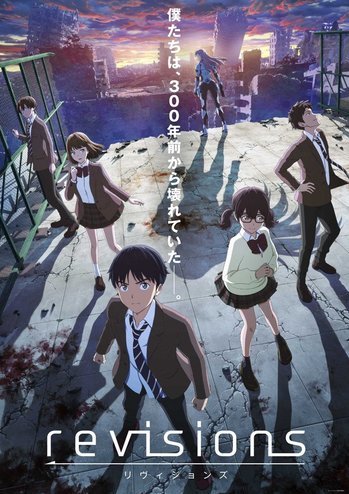 Revisions is an anime series directed by Goro Taniguchi (Code Geass) and animated by studio Shirogumi (Etotama). It first premiered in Japan on January 10, 2019. Later, Netflix picked the series up as an original and streamed it worldwide from May 14, 2019.

The story centers on Daisuke Doujima, a second-year high school student who, as a child, was kidnapped and then rescued by a mysterious woman named Milo who told him that something will happen to him and his friends in the future and he must protect everyone when it comes. One day, Daisuke, along with his friends Gai, Luu, Marimari, and Keisaku, get wrapped up in the mysterious phenomenon known as the "Shibuya Drift." The central area of Shibuya rises up and is transported at least 300 years into the future. What awaits them is a vast wasteland and forest dotted with ruins. They're then attacked by monstrous creatures called "Revisions", which begin grabbing random people to kidnap. Daisuke then meets Milo again, although she doesn't recognize him this time. Milo informs Daisuke that he and his friends are the only ones who can operate the "String Puppet" mecha weapon and protect Shibuya. Daisuke and his friends must figure what who the Revisions are and what they want, all the while trying to find a way back to the past.

The anime had received a manga adaptation and a light novel adaptation during the anime's run. However, it is available only in Japan, and an official English translation hasn't been announced as of 2021, which might be unlikely.