Graceful in Their Element 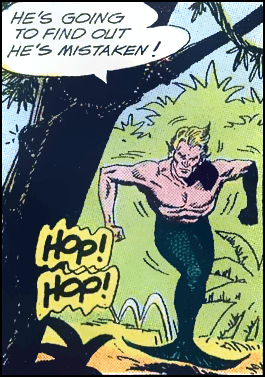 Flipping your fins you don't get too far...
"Put the Normandy in my hands and I'll make her dance for you. Just don't tell me to get up and dance, unless, you know, you like the sound of snapping shinbones."
— Joker, Mass Effect
Advertisement:

This character is much like a duck: they're awkward and clumsy on land, but put them in the water or in the air? Poetry in motion.

There's a lot of variation in this trope. Usually the character is The Klutz (or at least notably awkward) on land, but if given a chance they're very Graceful In Their Element. The variation comes in on what that more natural element might be. On or in the water, they could be a champion swimmer, skier or sailor. Ice-wise they could be an angelic skater. In the air, they might be an Ace Pilot. If machines are involved, they'll be a Badass Driver with Improbable Piloting Skills, and be able to turn a Humongous Mecha into an Impossibly Graceful Giant. If fighting, dancing or both are involved, they may be a consummate Dance Battler.

This Hidden Depth is used either for humor or to add a level of dichotomy to a character. It can make them seem a bit otherworldly; they're helpless on land, but they're so graceful outside of it that it seems like they don't really belong in this world. This can be further reinforced if the awkwardness is due to a physical disability, so it becomes a case where putting someone in a new medium where they're on a level playing field with everyone else lets them surpass their limitations.

To a certain extent, this is Truth in Television. Moving in a different medium like asphalt, ice, and zero-g vacuum requires an entirely new skill set that doesn't completely map out with bipedal terrestrial locomotion. While being naturally graceful and aware of kinesthetics makes learning skating or piloting easier, it's by no means a free pass.

Sister Trope to Eloquent in My Native Tongue and Bunny-Ears Lawyer (when someone's personality is extremely awkward, but they're an expert at their profession). See also Crippling Overspecialization, Dancing Royalty.