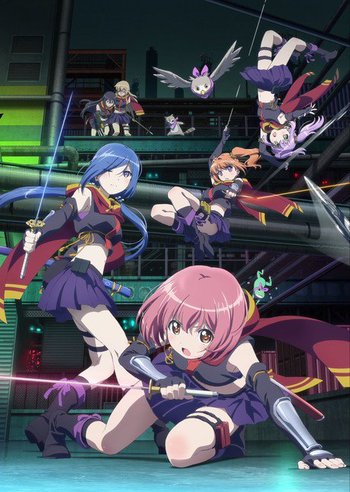 Momo Minamoto is your average, everyday Ordinary High-School Student, who goes out for a walk one night and sees five suspicious figures running across the rooftops of the factory across the river. It turns out that her city is a secret battleground between Tsukikage, an organization of ninja spy girls dating back to the Warring States era, and Moryo, a Mega-Corp with sinister motives. Momo is scouted to join Tsukikage... the members of which turn out to be five of her fellow classmates, who welcome Momo into their group and recruit her in their battle against Far-East branch Moryo leader Kurara Tendo/Sparrow Woman.

The Tsukikage all use a performance-enhancing substance called "Spyce" to temporarily supercharge their bodies, but it only works on young girls.

An original production from studio Lay-duce, written by Takahiro (writer of Akame ga Kill! and Yuki Yuna is a Hero) and with character designs by Namori, Release the Spyce began airing in the Fall 2018 season. A side manga and a serial novel are being published since January and February of the same year respectively.

Compare to the Senran Kagura series, which also stars a cast of ninja girls going on secret missions, but with more focus on Fanservice.