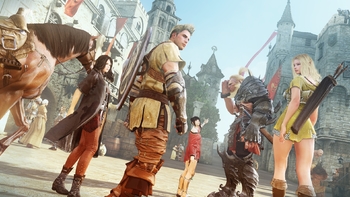 The combat in Black Desert Online is action based, requiring manual aiming similar to those found in third-person shooters. Skills can be activated through use of combos. With limited healing skills, players must rely on well timed dodging or blocking as well as liberal use of potions. Players can use the mouse and keyboard or gamepad for navigation and combat.

Black Desert Online takes place in a high fantasy setting and revolves around the conflict between two rival nations: the Republic of Calpheon and the Kingdom of Valencia.