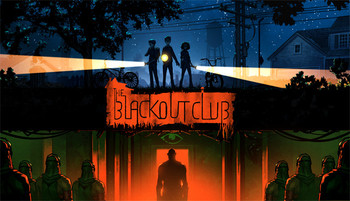 No one believes you? Join the club.
"It took your friend. They say it's not real."
Advertisement:

. It entered Steam Early Access on 31 Oct, 2018 and the full game was released

Up to four players work together as members of The Blackout Club, a group of kids who have run away from home and teamed up to combat the mysterious supernatural force that has taken root within, and beneath, their homes. The young members of the club roam the town at night, avoiding their sleepwalking parents and the cult's technological sentries, doing what they can to save themselves — and everyone else. Each nightly mission consists of several procedurally-generated objectives, both on the surface and in the ominous facility lurking beneath: Recording video evidence, sabotaging the cult's plans, retrieving stolen items, and even rescuing kidnapped club members. If the cult begins to notice their activities however, the children may attract the attention of their ultimate enforcer — a mysterious and frightening creature known only as "The Shape", a being who can only be seen when you close your eyes.

Alternatively, a player can take the part of a Stalker, a mysterious kid who silently invades other players' missions, stalking the Club Members and recording their wrongdoings to betray them to the cult. Playing as the Stalker is the only PVP element currently in the game.