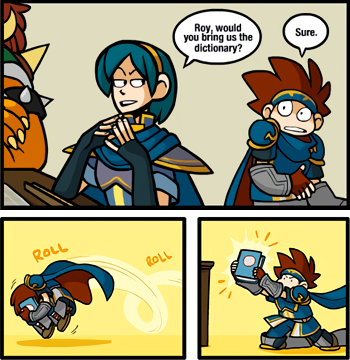 For no apparent reason, the protagonist will tuck into a roll, coming out shooting. If this is during some sneaky activity, rather than outright combat, they may do the roll to cross any open space, for no apparent benefit. In Real Life of course, coming out of a roll into a shooting position puts the person in a less-stable stance, wastes a lot of time and energy, and is likely to be very disorienting. Often parodied, through sheer gratuity, through the rolling individual just being really bad at it, or through lampshading.

Video games tend to fall victim to this as the negative consequences of rolling are often omitted as Acceptable Breaks from Reality. This often leads to repeated diving rolls being a better choice than flat-out running when moving from place to place, something especially evident in Speed Runs. It could be argued that in Real Life a single diving roll covers more distance than a large step — it's the recovery that takes a lot of time and the maneuver is likely to result in injury. Remove the need for recovery and make rolling safe, and we might as well roll rather than run or walk. Of course, if you DO have the agility and balance to pull it off and recover on landing, it suddenly becomes a really effective

method of outmaneuvering someone.

The level of athletics needed to pull that feat off is probably why it is left to the high Dex classes.

Closely related is the preferred method for passing through a Laser Hallway, only in that case the flipping and rolling makes perfect sense, it's the layout of the lasers that doesn't.

Note that rolling is acceptable when the character has fallen from a great height, as otherwise piling the weight of of one's entire upper body on one's legs is a good way to cause injury or break the bones holding them together.

Not to be confused with Attack Roll, Roll-and-Move or Rolling Attack. The Indy Hat Roll is a related trope.

While scouting, Finn attempts an unnecessary combat roll and face plants into a rock.

While scouting, Finn attempts an unnecessary combat roll and face plants into a rock.