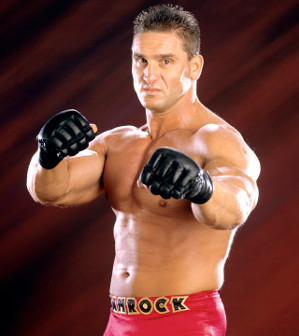 The World's Most Dangerous Man
"I will get my respect or I will die."
Advertisement:

Kenneth Wayne "Ken" Shamrock (born Kenneth Wayne Kilpatrick; February 11, 1964) is an American retired professional wrestler and mixed martial artist best known for his work in WWE and the UFC. He actually started as a pro wrestler, debuting in the South Atlantic Pro Wrestling promotion in 1989, under the name "Mr. Wrestling" Vince Torelli. This led him to All Japan Pro Wrestling, and he would go back and forth between SAPW and Japanese "shoot-style" promotions such as Universal Wrestling Federation and PWFG until he walked away from wrestling for MMA. He competed for Pancrase and was on the first UFC event and would compete regularly for them until he returned to wrestling in 1997, this time for WWE. Over his time in WWE, he would hold the WWE Intercontinental Title

once with the Big Bossman and win the 1998 King of the Ring Tournament. He returned to MMA in 2000 and went back and forth between the two. In 2002, he signed with the new NWA-TNA promotion, and was crowned the new NWA World Heavyweight Champion

at NWA TNA #1. He has also been a trainer and was a coach on The Ultimate Fighter. His achievements in MMA include winning the UFC Superfight Title

and, along with Royce Gracie, being one of the first inductees into the UFC Hall of Fame.