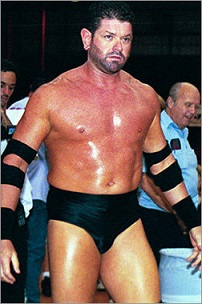 "He beat him! Horowitz beat him! Can you believe it?!"
—Jim Ross, WWF Wrestling Challenge, July 9, 1995.
Advertisement:

Barry Horowitz (born March 24, 1959) is an American professional wrestler from St. Petersburg, Florida best known, unfortunately, for his long losing streak in WWE in the 1980s and 1990s. He started his career in 1979 in the Florida independent scene after training under Boris Malenko, and also worked in WWE, the NWA Mid-Atlantic, Puerto Rico and Canada. He returned to Florida in 1985 as "Jack Hart," where, on July 23, he defeated Mike Graham to win the vacant NWA Florida Heavyweight Title

. He later worked in Memphis before returning to WWE in 1987, where he began his long losing streak. Following recuperation from a neck injury he suffered in early 1990, he switched to the Global Wrestling Federation in Texas, where he would defeat Jerry Lynn for the GWF Light Heavyweight Title

on February 7, 1992, a title he would lose to and, subsequently regain from, Ben Jordan by the end of the month. After the GWF collapsed, he returned to WWE and back to regular Jobbing. This changed suddenly on the July 9 (taped June 28), 1995 WWF Wrestling Challenge, where he shocked everyone by defeating Skip (Chris Candido) (w/Sunny), launching his first actual push in his various runs in WWE. He would subsequently defeat Skip again at SummerSlam 95 before inevitably going back to jobbing again until he left in 1997. He then jumped to WCW and more jobbing, with one exception. He defeated "Mr. Hole-In-One" Barry Darsow on the October 31 (taped October 20), 1998 WCW Saturday Night by DQ when Darsow hit Horowitz over the back of his neck with the putter. He has subsequently worked for many independent promotions. He made his PPV debut at Survivor Series 93 in the Hart Family (Bret/Owen/Bruce/Keith) vs. Shawn Michaelsnote A replacement for Jerry Lawler who was taken out of the match due to what would later be discovered to be a bogus rape charge and the Royal Knights (The Red Knight [Horowitz]/The Blue Knight [Greg Valentine]/The Black Knight [Jeff Gaylord]). He also competed for All Japan Pro Wrestling and won some matches there, even getting to team with STAN HANSEN, and, on May 18, 1993, at AJPW Super Power Series 1993, Day 5, he and Dan Spivey DEFEATED Abdullah the Butcher and Giant Kamala II.

He has no connection to the character of the same name from True Blood.