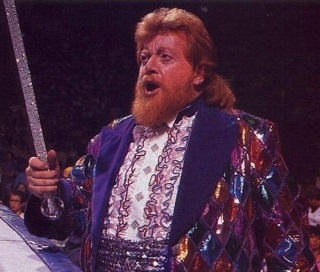 "He looks like that something that fell out of a deck of cards."
— Bobby Heenan
Advertisement:

John Jay Sutton (January 16, 1949 – March 20, 2011) was an American professional wrestling manager from Minneapolis, MN known for his work in various National Wrestling Alliance territories and other promotions during the 1970s and 1980s as Sir Oliver Humperdink.

He started his career in Montreal, Quebec, Canada in 1973. Don "The Spoiler" Jardine and Dale Hey (later known as Buddy Roberts of the Fabulous Freebirds) are credited with coming up with the name, with the intention of getting Heel heat because of how the Francophone fans hated anything English. He worked primarily as a manager, though he did briefly hold the NWA Florida Heavyweight Title, which he awarded to Ed "The Bull" Gantner, and the NWA Central States Television Title. He also had a short run in WWE as a Face from 1987-1988 as the manager for Bam Bam Bigelow and Paul Orndorff. He died from bladder cancer and pneumonia on March 20, 2011.