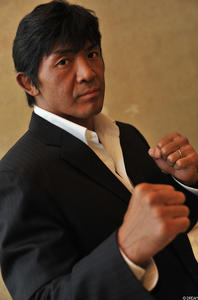 "He beat me up for [another] 30 minutes, armbarred me, everything."
—Ken Shamrock, about his first sparring with Funaki
"Funaki was like a mad scientist. He took the idea of submissions to an even higher level than the rest of the Japanese contingent. He had this insatiable desire to learn more and push his body harder. And as an entertainer he understood the need to entertain."
—Frank Shamrock, about Funaki's nature

Masakatsu Funaki (b. 1969 as Masaharu Funaki) is a Japanese Professional Wrestler and Mixed Martial Arts fighter, founder of the proto-MMA company Pancrase. He debuted in 1985 for New Japan Pro-Wrestling, being a Yoshiaki Fujiwara trainee along with Minoru Suzuki. When Fujiwara left for the shoot-style promotion UWF Newborn, Funaki and Suzuki got a permission to follow him, and they became part of the UWF roster. The promotion fell afterwards and his faction, led by Fujiwara, formed Pro Wrestling Fujiwara Gumi, but it was short-lived as well. Funaki and his colleagues realized that Japanese crowds really would pay for see "real" matches with non-worked outcomes and launched Pancrase, the second MMA promotion in history. Using the catch wrestling roots they had learned from Fujiwara, which they called "hybrid wrestling", Funaki and Suzuki became the aces of Pancrase and had legendary fights with names like Ken Shamrock, Bas Rutten and Guy Mezger, with Masakatsu gaining the King of Pancrase title twice. During this time, Funaki was worshiped as one of the three shoot-style aces, along with former mentors Akira Maeda and Nobuhiko Takada. Towards the end of his career, severe injuries took his toll on his body and he was forced to retire after a defeat to Rickson Gracie, passing the torch to his trainee Yuki Kondo. He then returned to professional wrestling for Keiji Mutoh's All Japan Pro Wrestling, later following him to the new WRESTLE-1.

"Yes, We Are Hybrid Tropes":