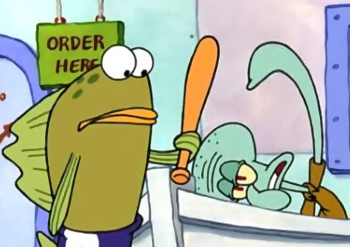 "Don't hold back."
"I want you to hit me as hard as you can."
— Tyler Durden, Fight Club
Advertisement:

For whatever reason, one character has to convince another to try to strike them. Perhaps it is in order to show the avoidance skills of the hittee, to teach the hitter how to hit, or to intentionally hurt the hittee. Occasionally, it's to make up for the hittee previously attacking the hitter. One common use is when the hittee is an Action Girl, and the hitter Wouldn't Hit a Girl. Standing close together, the hittee taunts the hitter with ever-escalating demands of "Hit me, dammit!", countered with demurrings of "I can't/won't!"

This continues for several volleys until the hitter strikes the hittee. If it's for comic effect, the hittee is actually surprised and may be knocked out. They may deliver a line of surprise such as, "You hit me!"

Sometimes crosses over with My Fist Forgives You or with Self-Mutilation Demonstration ('cause you might ask someone else); frequently shows up in Make It Look Like a Struggle. Strike Me Down with All of Your Hatred! is when someone wants to be hit so that the hitter will break their moral code and fall from grace. Another variant of this trope is when someone asks to be hit because it turns them on, although that usually will have negative consequences.

Ned wants Homer to punch him

Ned Flanders wants Homer Simpson to punch him in the eye so they're even.

Ned wants Homer to punch him

Ned Flanders wants Homer Simpson to punch him in the eye so they're even.