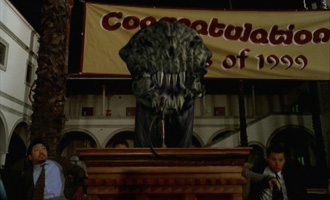 Change you can believe in!
"Congratulations to the class of 1999. You all proved more or less adequate. This is a time of celebration, so sit still and be quiet."
—Principal Snyder
Advertisement:

We're back on the balcony; Faith has just taken her swan dive. Buffy is in a state of shock over what's she done. She scurries down the fire escape — just missing Mayor Wilkins and his henchvamps, who emerge upstairs. Wilkins surveys the shattered window and pieces together what happened. He orders one of his mooks to find the Slayers: "Put everyone on it." The mook meekly reminds Wilkins that they're on a tight timetable here...

The henchvamp exits as the Mayor quietly goes bonkers.

Back at the mansion, Willow and Oz are tending to Angel, who is delirious. Buffy enters, and they ask if she found Faith in time. Buffy asks to be alone with Angel. Naively, her friends take their leave, no doubt assuming she's come to pay her last respects. Buffy goes into Angel's room, where he tells her he's ready to die. She disagrees, then slips off her jacket:

Angel's having none of that. He begs her to not make him drink, and she punches him in the face. ..And when that doesn't work, she punches him two more times. This triggers the game face. She pushes her shirt aside and pulls his face to her neck. He begins to feed. Buffy goes weak, and they fall to the floor. He ends up taking too much and Buffy passes out just as Angel finally breaks free ... but gets no response from an unconscious Buffy.

Angel rushes Buffy to the hospital, then goes to use a payphone. In a nearby room, a doctor is telling the Mayor that Faith has broken bones, damage to the kidney, head trauma, and severe blood loss—there is almost no chance that she will ever awaken. The nurse comes in to tell the doctor about the other girl with severe blood loss. A lightbulb goes off. The Mayor realizes who it must be, walks into her room, and puts his hand over her mouth, trying to smother her and moves her head so the bite wound will open and she'll bleed. The nurse tries to stop him and calls for security. Angel bursts back in and yanks the Mayor away, causing a scene. The Mayor, all smiles again, dusts himself off and tells the onlookers the "show's not over — but there will be a brief intermission." Angel grrs that he'll be there.

The Scoobies arrive, having received Angel's phone call. Xander notes with mock sincerity that when chips are down and things look grim, Angel can be counted on to save his own ass. Angel apologizes, but Giles icily insists that Angel go; the sun will be up soon. The lonely figure of Angel departs down the hall as the others go see how Buffy's doing.

Buffy finds herself in Faith's sunny apartment, which is full of moving boxes. It's a dream, of course, which Buffy seems to realize. The two trade cryptic comments, and Faith offers Buffy a tip: "Human weakness. It never goes away. Even his." Faith reaches up to touch Buffy's face, thus awakening her.

Buffy wakes up in the hospital, and walks into Faith's room. She compassionately kisses the unconscious Faith on the forehead, and walks away. Then, after changing from the hospital gown into her street clothes, goes out and tells the gang to get Angel; she's ready for war.

Back in the library, Buffy has just finished describing her plan to the gang. Wesley enters, and Buffy tells him she's in no mood for orders and that the Council is no longer welcome, but he says he is there to help of his own volition; not on behalf of the Watcher's Council. He tells them the Ascension will be preceded by an eclipse, putting Angel "back in the game." Xander and Willow are to recruit other students for help, while everybody else is put on "volcano detail." Buffy instructs Giles to get "weapons, weapons, weapons." In Giles' office, Angel tells Buffy that he's not going to say goodbye; when the whole thing is over, he's just going to go. Later, Jonathan and Larry carry a last bag of fertilizer into the school from Oz's van. Cue Willow and Oz having sex, again.

The students march in to the Graduation ceremony. Willow arrives to her seat, next to Buffy. A little way into the Mayor's speech, the sky goes dark. He doubles over in pain. Characteristically, he tries to continue with his upbeat speech. But to no avail. The Mayor suddenly morphs into a giant serpent/dragon thing.

The students take off their gowns to reveal a full range of medieval-type weapons, plus a few flame-throwers. The Mayor finds himself attacked with fire. Snyder finds this whole scene unacceptable. Xander gives the order to "Fire!", and the students rain down flaming arrows on the vamps. The vamps turn to flee, but are walled off by a pack of good guys, including Angel, Wesley, and Percy. Snyder shouts warnings at Olvikan, insisting on maintaining order on his campus. He is interrupted when Olvikan eats him. Buffy shouts up at the Mayor, holding the knife he gave to Faith as a gift. Remember this?

"You wanna get it back from me? Dick?"

Buffy scurries back into the school, the Mayor right behind her, head-butting through entire walls. She runs through the library, then ducks out a window, leaving Olvikan surrounded by fertilizer explosives.

Giles sets off the explosives—and the library, the Mayor, and the whole darn school are awash in a sea of flames, smoke, sparks, smoke, and still more smoke.

In the aftermath, fire trucks and ambulances litter the area. Giles congratulates Buffy on a job well done, and pulls out her diploma, which he fished out from the wreckage. Buffy spots Angel twenty yards away. They exchange a long, plaintive look. He turns and walks away, disappearing into the haze.

The gang gathers together, taking stock of the situation. Oz thinks they should take a moment to reflect on the fact that they survived. Buffy comments that it was a hell of a battle, but Oz says screw that noise: they survived High School. They all stare blankly at the smoking ruins. Oz is spacious. "We're taking a moment."

The girls get antsy and leave.

"...and we're done." Everyone walks off together.