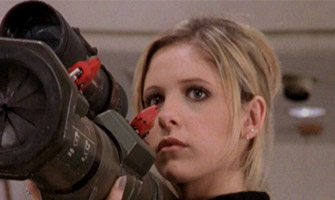 Peekaboo.
Oz: So, do you guys steal weapons from the army a lot?
Willow: Well, we don't have cable so we have to make our own fun.
Advertisement:

After making love with Buffy earlier that night, Angel stumbles into the alley outside as his soul is ripped from him. When he shows up at the factory, Spike is surprised and Drusilla are stunned that the Judge cannot burn him—Angel has reverted to the evil Angelus. The three are pleased to be a "family" again. Meanwhile, Buffy wakes up to find Angel missing, and starts a desperate search for him. Eventually finding him back at his apartment, Angelus begins his torment of her by hitting her with numerous cutting remarks about the previous night.

While researching a way to defeat the Judge, Xander and Cordelia get caught kissing in the library by a crushed Willow. Angelus terrorizes Buffy and the Gang at school, and after several realizations about what might have happened to cause it, an emotionally shattered Buffy leaves, unable to cope. Buffy has another dream in which Angel helps her realise that Jenny knows more than she's letting on. The next morning she confronts Jenny at school, who admits she is a member of the Romani clan that cursed Angelus with his soul so long ago.

Xander hatches a plan using memories from being a soldier on Halloween, posing as an off-duty soldier looking to make out with his girlfriend in order to sneak in and borrow some heavy duty ordnance. Tracking down the Judge at the crowded mall, Buffy and her team blow him to bits with her new "present" – a rocket launcher, while Angelus and Drusilla narrowly escape the blast. The Slayer stalks Angelus through the fleeing crowd. Reaching a stand-off, neither of them is quite ready to kill the other, although Buffy does settle for kicking Angelus in the nuts.

Buffy home and she feels awful for putting her friends in serious danger from Angelus. Giles assures her that, although she did act irresponsibly, it is obvious that she and Angel loved each other and that he hasn't lost his trust and respect in her. Later, Buffy and her mother sit down to watch a movie. Joyce asks Buffy what she did for her birthday, and Buffy simply answers that she got older.

"Things are about to get very interesting..."