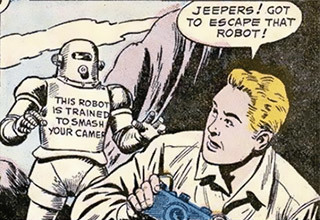 Two Examples of an Expo Label, including this caption note  Also, trained? Not programmed?
Advertisement:

As You Know, one of the more obnoxious side-effects of creating a believable world in Speculative Fiction is Expospeak. Aha! I've got it! An alternative to using a narrator (or making characters look bat-shit crazy as they stand around talking to themselves) is to label everything so clearly that the audience can tell what it is without further explanation! Everything shall be Exactly What It Says on the Tin!

Most ordinary things are not labeled like that in Real Life. While an Expo Label or two can help with the pacing, they can easily come across as silly and awkward.

On the other hand, various scientific and technical fields are notorious for labeling everything in sight. Console gauges, dials and switches are often clearly marked, with broken components tagged as such to reduce costly (or potentially lethal) operator errors. Programming courses actually encourage you to label every single thing you code. And, obviously, medicine bottles have to tell you what's contained in them and how frequently you take doses of said medicine.

Accordingly, the Big Red Button often has an Expo Label. Bonus points if it's handwritten on a piece of masking tape because the creator hasn't had the time or inclination to mount anything permanent. When it's a secret location that's being labeled, it's a Neon Sign Hideout.