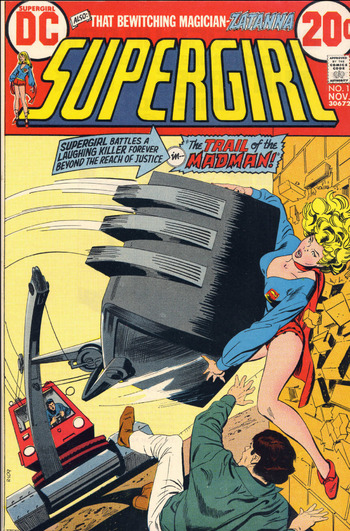 Wishing and Hoping... on the threshold of new life for herself — the Maid of Might swoops over San Francisco's majestic Golden Gate!
"I'm so happy... I think! Quitting my job at KSF-TV was the smartest thing I've ever done... I hope! Now I'm going to pursue my real ambition... at last!"
— Supergirl
Advertisement:

Supergirl's book actually enjoyed decent sales, but by the mid-'70s DC developed a new publishing strategy: keep their profitable big-name (licensable) characters in their own regular comic-books, cancel the worst selling titles outright, and merge everything in-between into super-sized anthology titles. As such, characters with good sales but limited licensing possibilities found themselves sandwiched together into the pages of titles such as Superman Family, Batman Family, or Super-Team Family. And so, in March 1974, Supergirl's adventures were moved to Superman Family, a new 100 page bimonthly anthology spotlighting various characters within the Superman universe (including Superboy, Supergirl, Lois Lane, Jimmy Olsen, the private life of Clark Kent and the adventures of Earth-Two Superman and Lois Lane).

Linda Danvers: Ohmigosh! Not now! Why does a crisis have to crop up just now!