Talking in Your Dreams 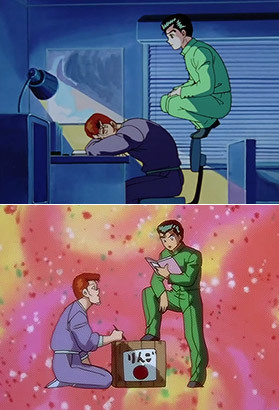 Or rather, teaching in your dreams.
"We bring the subject into the dream, and they populate it with their subconscious. You can even talk to my subconscious; that's one of the ways we extract information..."
— Dom Cobb, Inception
Advertisement:

You're asleep, you're dreaming — you're really talking with someone else. Or fighting them. Or —

Dreams that are secretly (or openly) a form of two-way interaction. (The other person may or may not be asleep.) Harm can only come to the dreamer through psycho-somatic effects, or as mental damage. Maybe the other person is a Dream Walker.

May shade into Dreaming of Things to Come / Opinion-Changing Dream, if the other person tells of or shows the future, or Dreaming of Times Gone By, for the past. Dream Spying is particularly likely to overlap, letting the dreamer see the present with the other as a guide. May be mistaken for Dreaming the Truth, or if a Dead Person Conversation, be indistinguishable.

May take place in Dream Land. Supertrope of Your Worst Nightmare. Can be a form of Adventures in Comaland, if you are seriously out of it.

Not to be confused with Talking in Your Sleep, which may or may not share similarities with this trope.