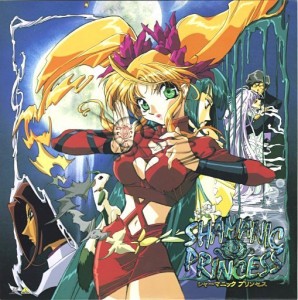 Our heroine and her "friends", ladies and gentlemen
Advertisement:

Shamanic Princess, a six-episode Original Video Animation series from The '90s, is a Darker and Edgier Magical Girl created years before it was cool. It starts with one of the oldest anime character tropes, the Cute Witch, makes a quick stop at Magical Girl Warrior, and heads directly into Psychological Horror territory without looking back. While it is a Shōjo narrative at heart, focused on relationships and personal growth, it caters to the male Periphery Demographic so well that it ceases to seem peripheral. Let's just say that the fight scenes are impressive and the fanservice is plentiful.

The story follows the titular shamanic princess, Tiara — a remarkably capable (and stripperiffic) Cute Witch who works as a special agent for the Guardian World — as she goes to Earth disguised as an Ordinary High-School Student to recover the Throne of Yord, a mystical artifact stolen from her world. Her mission becomes complicated when she discovers a terrible secret surrounding the artifact — and when some of Tiara's friends and colleagues from her magical world fight her to keep her from retrieving it. As Tiara soon discovers, the Throne of Yord is no mere MacGuffin, but a sentient being bent on making her suffer for its amusement.

Those who know of Shamanic Princess remember the OVA for its Mind Screwery and its somewhat-infamous non-linear storytelling (which drops the viewer into the action with little explanation and shows the circumstances that caused it all to occur as a 2 episode prequel after the story's conclusion).