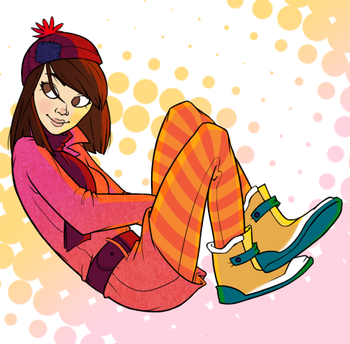 Kimiatek's Author Avatar
Anonymous: Why do you love to draw [...] ?
sasha-art: I’ve been drawing my whole life and it’s become kind of a spiritual and mental outlet for me. There’s honestly nothing better than the creative high and the sense of fulfillment you feel when you’ve finished a piece of art that you’re really proud of.
—From Kimiatek's Tumblr

Sasha Kimiatek, also known as Sasha Fay, is a professional illustrator who has been employed as a production artist for numerous renowned media vendors. These vendors include Marvel, IDW Publishing, Boom! Studios and more. Under hire, Kimiatek has lent her personal and administrative talents to the production of comics, advertising, graphic design and apparel. In addition, she also currently works as a freelance artist and frequently takes on new comissions.

Although she originally intended on receiving her education in acting and set design, Kimiatek moved on in a separate direction to complete her B.A. in Design and Applied Arts in 2013. After graduating, she began honing her drawing skills on her own time.

This creator's artistic style varies greatly by which genre she is currently invested in. Eastern culture has been a large influence within her overall work and often incorporates some aspect of it. The meaning behind her works, however, is often philosophical and may overlap with addressing personal issues, such as being proud of/accepting your person and overcoming adversities.

Sources
● Her available products can be found HERE

● Her blog, containing her sample artwork, can be found HERE

● Her personal website with full credits can be found HERE

Tropes relating to this artist and her works: