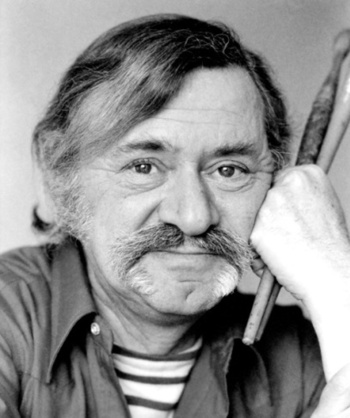 Ezra Jack Keats (March 11, 1916 – May 6, 1983) was an American illustrator and author of children's picture books. Born Jacob Ezra Katz in Brooklyn, New York to a poor family of Polish-Jewish immigrants, Keats worked as a commercial artist throughout the 1940s and 1950s before finding his calling as a picture book illustrator.

His 1962 book The Snowy Day has been heralded as a major turning point in American children's literature as the protagonist Peter was the first African-American child to be the central character as opposed to being a token background character. The Snowy Day won the Caldecott Medal a year later in 1963. Peter went on to appear in at least six more books such as Whistle for Willie and Peter's Chair.

Keats was known for using mixed media throughout his books, mainly collage with a variety of papers. He would also combine this with pen, acrylic, watercolor, gouache and ink.

Tropes about Ezra Jack Keats and his work: