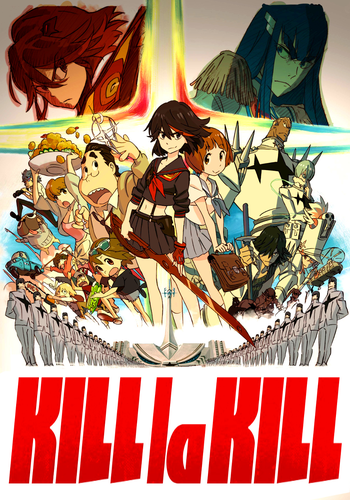 Kill, or be killed!
"Fear is freedom! Subjugation is liberation! Contradiction is truth! Those are the facts of this world, and you will all surrender to them, you pigs in human clothing!"
— Satsuki Kiryuin, "If Only I Had Thorns Like a Thistle"
Advertisement:

unless said studio happened to be made up of ex-Studio Gainax and Studio 4°C members, and the production's director, writer, and lead character designer also worked together on Tengen Toppa Gurren Lagann and a composer who did the music for Mobile Suit Gundam Unicorn and Attack on Titan. Kill la Kill was also heavily influenced by the 1980s comedy/battle seinen anime film Project A-ko, which featured almost identical character dynamics and types amongst its main female protagonists, and a similar main conflict. It was also heavily influenced by Cutey Honey with Ryuko having a similar origin story to Honey. Kill la Kill was originally conceived as a manga focused entirely on battle scenes, but it shifted during production to become more character-focused.

,note also with German, Italian, Spanish, and Portuguese subs, available for all users an hour after Japan broadcast, Crunchyroll

It was one of the most requested shows for Toonami on Adult Swim, which aired the series from February 7, 2015 to August 1, 2015, before being replaced by a similarly-named-but-not-related show. As of right now, both the sub and dub are available on Netflix

Other similar anime shows include Tengen Toppa Gurren Lagann, this show's spiritual predecessor, Panty & Stocking with Garterbelt, which similarly has women being powered up by their clothing and was also made by the same people, Promare, its Spiritual Successor, Puella Magi Madoka Magica its Spiritual Antithesis and Keijo!!!!!!!!, a similar Affectionate Parody of the Ecchi genre only done with the concept of sports anime rather than Magical Girls.