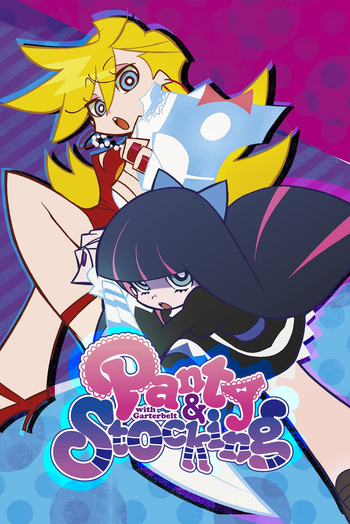 "O pitiful shadow lost in the darkness, O evil spirit born of those drifting between heaven and earth, may the thunderous power from the garments of these holy, delicate maidens strike down upon you with great vengeance and furious anger, shattering your loathsome impurity and returning you from whence you came!
REPENT, YOU MOTHERFUCKER!"
— Panty and Stocking
Advertisement:

The angelic Anarchy sisters have been exiled from Heaven for their less-than-heavenly behavior. Struck down to Daten City, located on the border of Heaven and Earth, the two sisters, Panty (Arisa Ogasawara) — an incredibly promiscuous blonde who can turn her panties into guns — and Stocking (Mariya Ise) — a goth girl with an eternal craving for sweets who can turn her stockings into swords — must buy their way back into Heaven by killing ghosts, the evil, corrupted spirits of man that have been plaguing Daten City. Aided by their immortal dog-like thing Chuck (Takashi Nakamura) and guided by Father Garterbelt (Kouji Ishii), a black priest with a titanic afro and a variety of sexual fetishes, the sisters fight ghosts in sexy, exciting, and just plain old weird ways.

In other words, you're watching a typical Studio Gainax anime.

2010's Panty & Stocking with Garterbelt mixes a raunchy sense of humor that wouldn't be out of place among any [adult swim] programming with director Hiroyuki Imaishi's trademark sense of slick style and blistering, over-the-top action. The show was created as an obvious homage to western cartoons (the story goes that much of the production crew of Imaishi's previous show watched an episode of Drawn Together while drunk and pondered what was stopping Japan from making a show like that), from its Powerpuff Girls-esque Thick-Line Animation art style, Two Shorts format, and western-styled Episode Title Cards and 30-second long opening theme tune. Coupled with an eclectic pop and electro-house soundtrack primarily produced by TCY Force and ☆Taku Takahashi, Panty & Stocking stands out as likely the weirdest, kookiest, most out there series to ever come out of Gainax (which is saying an awful lot).

In 2012, Funimation licensed the series for North America, streaming it on their website before releasing it on both DVD and Blu-ray. Starring Jamie Marchi, Monica Rial, and Christopher Sabat as the titular three, the English dub rather liberally translates the dialogue into something that manages to be even more raunchy, vulgar, and denser on the jokes than the original Japanese script — and considering the show's obscene subject matter and aforementioned western cartoon influence, it certainly works to its benefit.

After its obligatory Gainax Ending, the series teased a second season, but Hiroyuki Imaishi left Gainax in 2011 to form Studio TRIGGER, bringing much of the show's production staff with him and leaving the series in limbo. In January 2017, Imaishi and other ex-Gainax staff released a doujin

titled Geek Boy Homecoming that serves as a sequel to both Panty & Stocking and another series. In 2021, merchandise for an Imaishi mueseum exhibit (such as this stand

) suggested that Studio Khara had obtained ownership of the IP at some point prior, and after over a decade of waiting, "NEW PANTY & STOCKING" was formally announced to be in production by Studio TRIGGER at their 2022 Anime Expo panel.

This anime features examples of:

open/close all folders
Tropes # to M
Tropes N to Z
Garterbelt: ...ahem. Go! Follow the Panty path! Brief and Chuck, be on your way!

TO BE CONTINUED
IN NEXT SEASON
Feedback