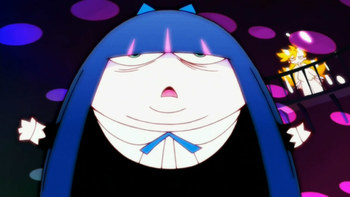 That’s not the right time to transform. Panty’s face says it all.

Being supervised by the creators of Tengen Toppa Gurren Lagann and Dead Leaves, and also being a sickeningly raunchy Widget Series that is like the love child of The Powerpuff Girls and South Park, Panty & Stocking with Garterbelt easily gets an A+ in the department of hilarity.