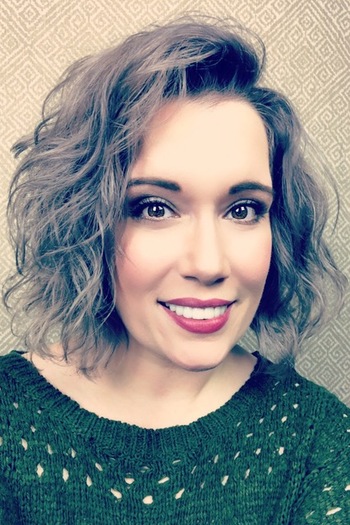 One of the best-known voice actors to come out of Texas, Monica Jean Rial (born October 5, 1975 in Houston, Texas) has been featured in many anime dubs. Her most notable roles are Sakura in Tsubasa -RESERVoir CHRoNiCLE- and Lyra in Fullmetal Alchemist. But she is really remembered for doing the "What is anime?" ADV Films commercial. Also notable for her very distinctive voice, which is actually her real voice. Yes, it really is that high.

She started off in Houston playing quiet girls for ADV Films, but over time expanded her range massively, with Yandere or all-around creepy girls becoming more common on her résumé. She'll even occasionally break out a husky, deep voice for Action Girl types (Jo from Burst Angel being the most famous example). Shortly before ADV's collapse, she relocated to Dallas and now does most of her work with Funimation, though she has been known to return to Houston to work for ADV's Spiritual Successor company Sentai Filmworks. In addition to being an actor, she is also an ADR writer and occasional voice director.

In the Anime News Network

She is often cast alongside Luci Christian (notably in Full Metal Panic! and Azumanga Daioh), Jamie Marchi (notably in Panty & Stocking with Garterbelt), Brittney Karbowski (notably in Cat Planet Cuties and Soul Eater), and Greg Ayres (notably in Kodocha, Save Me! Lollipop, and Ghost Stories).

Monica has a younger sister, Natalie, who made her debut as a voice actress in 2013 in the anime Girls und Panzer.