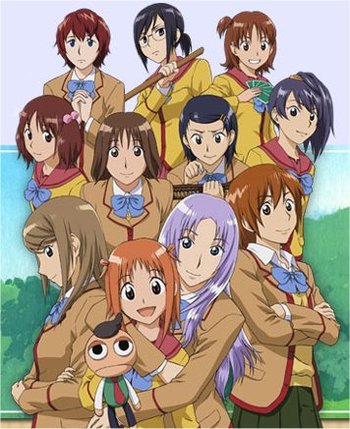 Best Student Council — Gokujou Seitokai in Japanese — is the story of a down-on-her-luck parentally-abandoned girl named Rino Randou trying to make her way through life, or at least school. She enrolls at Miyagami Private Academy, an all-girls school, at the written recommendation of the shadowy "Mr. Poppit", assured that everything including room and board will be taken care of — only to see that the apartment which had been provided for her had been burned down by a rampant arsonist. So, with only her clothes, luggage, a few yen, and her puppet - named Pucchan - to her name, Rino has only one option: Become a member of the student government in order to gain the free room and board at the school dorms afforded only to members of the Best Student Council.

For the most part, Best Student Council is quite episodic, and tends to focus on a single character per episode. Barring the beginning, which causes many people vague recollections of My-HiME., Best Student Council is a schoolyard comedy with drama at a few key moments. Don't expect too much seriousness out of a series that has a talking hand puppet as a major character, though.

The Japanese title is a contraction of the ending phrase of the narration: "Gokudai Kengen Hoyuu — Saijoukyuu Seitokai".

Dubbed by ADV Films, and released in early 2007.