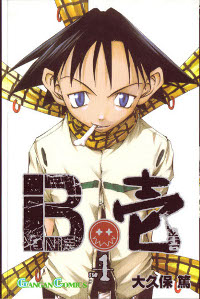 "Hey, did you know? Normal humans can't use more than 30% of their brains. But some humans called "Clowns" can use a special magic that allows them to use up to 50 or 60% of it. However, in compensation, they have to respect a certain "condition" linked to this power. Should they violate this condition… they would lose "something precious" within them."
Advertisement:

When the young girl Mana Hinoki arrives in Toykyo, capital of Japon (there are no typos), she stumbles across a young boy named Showtaro and quickly discovers that he is a "Clown": a human who awakened a special power, but has to stick to a specific condition. Showtaro can use the powers of various animals by biting one of their bones, but in exchange has to accomplish at least a good deed every day. After a little incident, Mana accepts to help Showtaro in his search for his best friend Emine. They are soon joined by Yowhey Nanami, a genius inventor who is chased by the Fear Factory, an evil firm for which he build a (defectuous) giant robot.

Published from 2001 and 2002 in Monthly Shonen Gangan, B.Ichi is the first, not so successful manga of Atsushi Ookubo. You could say B.Ichi was to him what Zombie Powder was to Tite Kubo. After Ookubo went and wrote Soul Eater, a much longer and much more successful series, this one fell into oblivion and is almost unknown even in Japan, but you could already find a few of the recurring graphic motifs of Soul Eater (like the skull). The series's characters, technology and environments have a rather peculiar design, and it doesn't take itself too seriously most of the time. The arstyle is also quite different from the one the author would adopt in his next work.