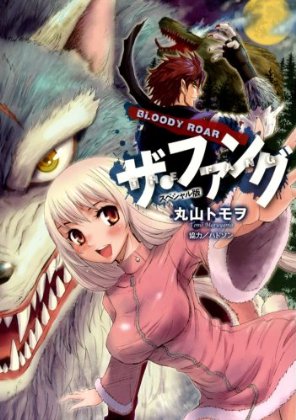 Bloody Roar: The Fang is an obscure manga series adapted from the Bloody Roar video game series drawn by Maruyama Tomowo, and was originally published in Monthly Shonen Jump from 2001 to 2002. The manga series featured a whole new cast of characters (a lot of them being lookalikes of characters from the games), and a setting fairly distant from the games, but the core elements remain the same: There exist humans who are able to turn into beasts, who are known as zoanthropes, and the Tylon corporation is out to exploit their powers. In this setting: Mashiro Toba goes with a supernatural investigator, "Fang", to prevent any disasters relating to zoanthropes from occurring, including any further experiments by her professor, Hashiba, who had experimented on her in the first chapter. The plot gets more elaborate as the story goes on. There are two volumes available, with six chapters each.

While the story never directly crossed with the continuity of its source material, it did have a bonus chapter that was featured in the promotional Bloody Roar Extreme V-Jump book, featuring Fang and Mashiro in the setting of Bloody Roar Extreme (or Primal Fury) and even teaming up with Yugo and eventually taking on Geisha.

The series was never released outside of Japan, nor was it ever localized. The wiki pages themselves don't have a whole lot of information available as of this writing. However, SCXCR, the man behind the Bloody Roar Retrospective had taken it upon himself to do his best to summarize the story as he went, discussing the characters, plot details, and even got into the few quirky moments that transpired. If you've got one hour to spare, you may watch his review and summary of the story here.

For those who are going to seek out the series, there are two different versions. The two individual volumes that have six chapters each, and the 400+ page compilation book that contains all the chapters. The former contains extra pages at the back of of each chapter where the creator discusses the manga, whereas the latter featured the previously mentioned bonus chapter.