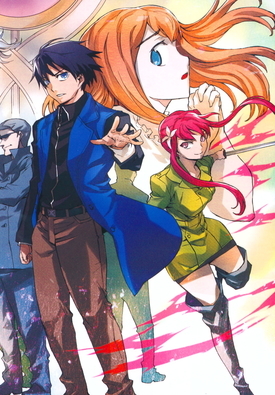 "What would you wish for? When you had one wish granted, whatever it is? I want to become a singer, I want money. I want immortality, I'm sure they're plenty to choose from.
But mine is slightly different."
Advertisement:

A manga by Sakae Esuno, creator of Future Diary and Hanako and the Terror of Allegory. Hoshimiya Eiji is an introverted high school boy who believed that he wished to be able to take over the world. His wish also coincided with a series of large scale disasters that suddenly swept across the entire planet, resulting in the deaths of millions. At the same time, special people all over the world made wishes, and were granted powers based upon them called Orders, Eiji amongst them.

Eiji naturally comes to the conclusion that he is responsible for the destruction. He becomes afraid of his power and decides not to use it again, forgetting his wish. He manages to live a normal life despite the existence of Order Users becoming public knowledge, but that all changes the day that the girl he had a crush on, Rin, turns out to be an assassin and tries to murder him.

Rin and her allies are aware of how Eiji is responsible for the destruction from ten years ago, and are hellbent on killing him before he can conquer the world. Despite Eiji's blatant desire to avoid doing anything of the sort, he will soon find himself at the helm of a dangerous organization of Order Users.