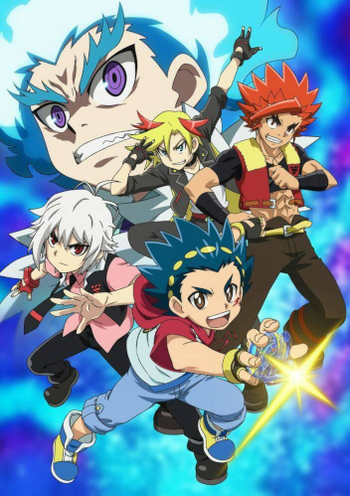 Let It Rip!
" Welcome to the world of Beyblade, where beys collide in the stadium alongside the passionate hearts of their bladers. This is the story of the fearless competitors who follow their dreams on an unforgettable journey to the top."
— Opening narration
Advertisement:

Beyblade Burst is the third incarnation of the Beyblade franchise. It is comprised of a 2015 manga series, written by Hiro Morita, and six anime series, which began airing on TV Tokyo on April 4, 2016.

In the first season, Valt Aoi is a cheerful boy in the 5th Grade. Enthusiastic about Beyblade, he works hard to better himself as a blader with his partner Bey, Valtryek. Valt's close friend Shu Kurenai, who is regarded as a Beyblade genius, is a participant in the National Tournament and a member of the "Supreme Four" due to his high influence. Valt, inspired by Shu, sets his aim towards the National Tournament.

Season 2, Beyblade Burst Evolution, follows Valt as he is scouted by the Spanish team BC Sol to participate in the World League, setting his sights on the International Blader's Cup and defeating the Big Five, the world's top Bladers. However, things get complicated once Shu goes missing, and a mysterious Blader known only as Red Eye shows up, determined to destroy all standing in his way.

Season 3, Beyblade Burst Turbo, features a new protagonist in Aiger Akabane, whom after witnessing Valt and his new Turbo Bey Wonder Valtyek in action, decides to forge his own Turbo Bey, Z Achilles, and sets out on his own path to rise through the ranks and take Valt's place as the world's number one Blader.

Season 4, Beyblade Burst Rise, follows the adventures of new protagonist Dante Koryu, a member of BC Sol under Valt's tutelage. Inspired by the strength of Valt's new Gamma Bey, Sword Valtryek, Dante sets off to Japan on his own journey to deepen his bond with his own Gamma Bey, Ace Dragon, in order to achieve a similar "Hyper-Flux" state with his Bey and be the best. This series was originally released as a web-only anime on Coro Coro and Takara Tomy's Youtube channels.

Season 5, Beyblade Burst Surge, centers around sibling duo Hikaru and Hyuga Hizashi, their newly created Lightning Beys Helios and Hyperion, and their journey to defeat Valt and all the Legendary Bladers they come across.

Season 6, Beyblade Burst QuadDrive, involves a young boy named Bel Daizora who calls himself the Dark Prince, the strongest Blader in the world. He lives in a large mansion streaming his matches within against the many challengers who seek him out. Along with his Destruction Belfyre, he sets out to prove how strong he is.

English: Rantaro: Roktavor's disc has a gravity feature that keeps it spinning no matter what!
Japanese (Translated): Rantaro: The heavy weight of Ragnaruk's Gravity Disc allows it to endure any attack!