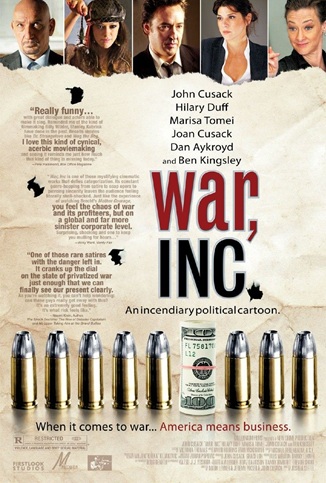 War, Inc. is a 2008 satire/Black Comedy about an ex-CIA assassin named Hauser (John Cusack) who works for the Halliburton-esque company Tamerlane. As the movie opens he's being sent on assignment to the recently "liberated" country of Turaqistan to kill an oil executive from a neighboring nation named Lyubomir Neikov, because Neikov is a barrier to Tamerlane's interests. Hauser's cover is a producer of a trade show demonstrating the effectiveness of Tamerlane's campaign, which basically puts him in charge of everything PR-related, from reeling in leftist journalist Natalie Hagelhausen (Marisa Tomei), who Hauser has a crush on, to managing the wedding of Yonica Babyyeah (Hilary Duff), a slutty Central Asian popstar. And Hauser's much-buried conscience is starting to flare up again...