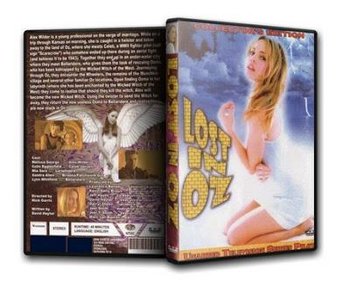 Lost in Oz was a 2002 One-Episode Wonder based on The Wonderful Wizard of Oz. It was written by David Hayter (yes, that David Hayter). As only one episode was made, the pilot will be summarized rather than the overall plot.

The plot follows a modern-day 21-year-old girl named Alex Wilder, who is whisked into the Land of Oz by a tornado. There, she meets Caleb Jansen, a time-displaced fighter pilot from World War II (call sign "Scarecrow"), and Selina, the Patchwork Girl, a Goth Warrior Poet radically different from her character from the Oz books. Alex learns that the Wicked Witch of the West has returned, bringing chaos to the land, and the three of them vow to stop her.

Bellaridere, the Good Witch of the South, tells them of Ozma, a girl trained to fight the Witch and restore peace. However, Ozma has been captured by the Witch, and the trio must work to save her. Bellaridere gives Alex a bottled tornado as an incentive, saying that once Ozma is freed, she can use it to take her home. However, 'Scarecrow' wants to use it for himself...

As they venture on their journey to the West, Selina eventually tells Alex that the Wicked Witch is the same one Dorothy defeated, now possessing Selina's best friend. When the Witch realized Dorothy could actually kill her, her soul possessed the girl and took the name Loriellidere.

They venture across Oz to rescue Ozma. However, when they confront the Witch, she reveals that Ozma has been enchanted to be a little girl forever, and they've failed her. Selina is subdued, but when Caleb pulls a gun on the Witch and explains how it can kill her, Alex starts to glow with energy. Alex learns that she is next in line to be the Wicked Witch's host; thus, they can't kill Loriellidere. Things are looking grim, until Alex opens the bottled tornado. Rather than using it to get home, she uses it to send the Wicked Witch far away.

The episode ends with Alex pondering the implications of being the next Witch, realizing the magic is part of her. Bellaridere explains that Ozma can't help them now, and asks Alex to lead them through the times ahead; Selina adds that no one but Dorothy ever posed a threat to the Witch before. Alex resolves to fight, and she and Caleb share a romantic moment.

And then the show was never picked up, so it never got beyond that one episode.

The pilot can be seen here

on Dailymotion or here

on YouTube. Bootleg DVDs of it are also around.