Film / The Muppets' Wizard of Oz 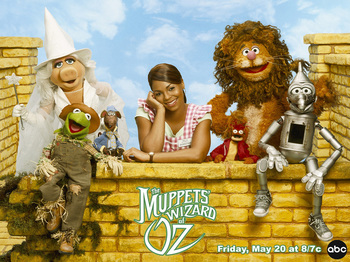 The Muppets' Wizard of Oz is a 2005 Made-for-TV Movie adaption of The Wonderful Wizard of Oz, with The Muppets. Staring Ashanti as Dorothy Gale, Kermit as the Scarecrow, The Great Gonzo as the Tin Man (here called Tin Thing), Fozzie Bear as The Cowardly Lion, Pepe the Prawn as Toto, and Miss Piggy as the witches of the East, North (Tattypoo), West, and South (Glinda). Despite many changes to suit the Muppet cast, it is actually more faithful to the book in some places than the classic film.
Advertisement:

Dorothy lives in Kansas and works as a waitress for her Aunt Em's diner. She dreams of becoming a famous singer, but one day, a tornado whisks her and her pet prawn to the land of Oz. The denizens tell Dorothy that the Wizard of Oz could make her dreams come true. On her way, she makes friends with the Muppets, who each have a desire for the Wizard to grant. When they meet the Wizard, he gives them a task to do before he can help them: defeat the Wicked Witch of the West.

Notable as the first Muppet production after Disney bought the franchise the previous year, though it had a largely negative critical reception, and Disney hasn't attempted any further literary adaptations starring The Muppets. Followed by A Muppets Christmas: Letters to Santa in 2008.

The Muppets' Wizard of Oz provides examples of the following tropes: