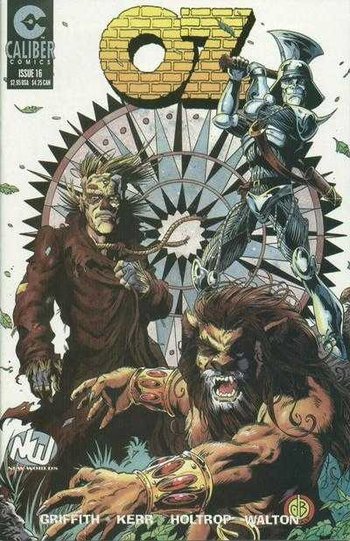 "Toto, I've a feeling we're not in Kansas anymore."
Pay no attention to the man who'll try to change you
He's a dark, familiar stranger.
But that's the danger.
The storm is strong but it won't be long
And no matter where you'll roam, there's no place like home
— "No Place Like Home", Straight Outta Oz
Advertisement:

L. Frank Baum's The Wonderful Wizard of Oz, its many sequels, and especially its 1939 MGM film adaptation are classic American stories about a utopian "fairy-land" known as Oz. Surrounded by a huge desert, it's cut off from the world and few can access it. Oz is ruled by the young Queen Ozma (more commonly called "Princess Ozma") and the sorceress Glinda the Good; Ozma's best friend Dorothy Gale is also later dubbed a princess but it's a title more than anything. In Oz, you don't need to age, you can't die, and almost everyone is content.

The series is known for its Surprise Creepy, with a fair amount of Family-Unfriendly Violence and Nightmare Fuel for a children's series. Many readers have also noticed some oddities about how Oz is presented (often due to Values Dissonance), such as how no one but the two regents are allowed to use magic, Ozma having a Magic Picture that lets her see anywhere, Glinda having a Book of Records that records anything the instant it happens, or how the former Wizard of Oz is treated as a "good man" despite all his previous misdeeds. It's essentially a dictatorship, but it's a benevolent one, so few citizens are unsatisfied. Still, these implications are enough to make writers brainstorm.

Just as Alice's Adventures in Wonderland has been routinely reinterpeted as being darker and/or more drug-related than intended, the Land of Oz books is reinterpreted as more political than intended. This dates back to the 1900s but it became especially prominent after a 1964 article by Henry Littlefield theorized that the first book was an allegory on the 1890s debate regarding monetary policy.

This has also led to countless other theories such as the Wicked Witch of the West being an allegory for the American west, the Scarecrow representing the troubles of American farmers in the late 19th century, and the Tin Woodsman representing the American steel industrial workers. That's even ignoring darker reinterpretations of the characters, such as how W. Geoffrey Seeley wrote in 1993 that the story is about Glinda convincing an innocent child to kill the last remaining Wicked Witch so that she can have full reign of Oz.

As a result, Oz and its characters routinely get referenced in dark, political manners and many adaptations politicize the setting or play the horrors straight. Glinda the Good Witch, the Wizard of Oz, and Ozma are especially prone to getting reinterpreted as more amoral than intended. The Emerald City will also be turned into a Stepford Suburbia that looks pretty and shiny but hides darker secrets underneath.

Sub-trope to Fractured Fairytale. Related to Off to See the Wizard and the main Referenced By page for The Wizard of Oz. Compare to Alice Allusion for another famous "modern fairy-tale" that often gets alluded to darkly.