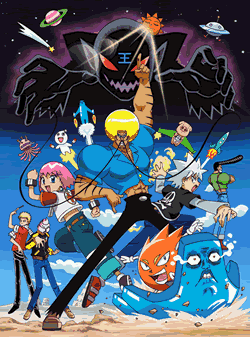 This show counts as a G-Rated Drug.
Wherever there's a head of hair being threatened by a criminal clipper, I'll be there!
Advertisement:

In the year "300X", the entire world is under the control of the Maruhage Empire (Chrome Dome Empire). Purely For the Evulz, Emperor Tsuru Tsurulina IV (Czar Baldy Bald IV) has initiated a globe-spanning crusade called the "Hair Hunt". Said Hair Hunt consists of the empire's army, the "Hair Hunters", pillaging countless villages and shaving the inhabitants of said villages bald against their will. But there's one man who means to put an end to the Hair Hunt and protect the hair of people everywhere, and his name is Bobobo-bo Bo-bobo (or "Bo-bobo", for short)!

Bo-bobo is the master of the Hanage Shinken (Super Fist of the Nose Hair), an oddball form of martial arts that grants him the ability to manipulate his own nose hair to defeat his enemies. More often, though, he defeats them by confusing them to the point of insanity with his countless eccentricities and endless assortment of sight gags (like little people living inside his massive blonde Afro). This is eventually revealed to also be a form of martial arts in Bo-bobo's world, known as "Hajike" (from the Japanese word "hajikeru", which literally means "to burst" but can also mean "to go crazy", translated as "Wiggin" ala the phrase "Wiggin Out"), where the object is to use these strange happenings to distract and confuse your enemy into submission.

The manga was serialized in Weekly Shonen Jump from 2001 to 2005, with an anime adaptation that ran from 2003 to 2005. The dub wasn't a direct translation from the Japanese original (just look at the narrator) as a lot of the jokes from the original source were centered around Japanese culture and likely wouldn't translate well to English-speaking countries. The anime was canceled after 76 episodes, and the American manga beginning at Volume 11 (renumbered) is on hiatus, with only five volumes released (supposedly they are going to translate more in the future, according to an email).

Not to be confused with Bobobobs, a similarly wacky (but infinitely saner) Japanese/Spanish animated series that enjoyed some heavy popularity in those countries in The '90s.

The heroes are told to look out of the window, only to find their view obstructed by a giant baby demanding his bottle. Rather than acknowledge this, they look out the window next to it.

The heroes are told to look out of the window, only to find their view obstructed by a giant baby demanding his bottle. Rather than acknowledge this, they look out the window next to it.