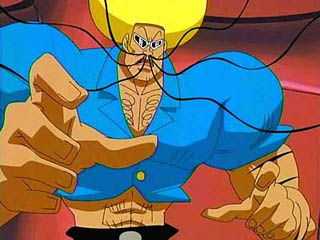 The main protagonist of the series, Bobobo-Bo Bo-bobo (or "Bo-bobo", for short) is a man who's made it his mission to put an end to the Chrome Dome Empire. He wields the "Hanage Shinken", or "the Super Fist of the Nose Hair", which grants him the uncanny ability to control his nose hairs like whips.

He's a Cloud Cuckoo Lander in every sense of the trope, being so incomprehensible and there even characters who're just as strange as him are perplexed by him. In fact, one Toonami promo said it best:

Bo-bobo is the youngest of five siblings who are masters of body hair-based fighting styles, and he is the chosen heir to rule the Hair Kingdom. One of his older brothers, Bi-bibi, responds by starting the Hair Hunt conflict in the first place out of jealousy. Even after getting murdered by Bi-bibi, Bo-bobo triumphs in the end, and he does the same during the Neo Maruhage Empire's reign in Shinsetsu Bobobo-bo Bo-bobo.

Beauty is an ordinary young girl who comes across Bo-bobo during his attack on the Maruhage Empire's G-Block Unit in a small village. Feeling the need for adventure, she becomes the first companion to join him. She is unable to fight back, but shows signs of boldness on occasion, and it's her who serves as a motivator for Bo-bobo. 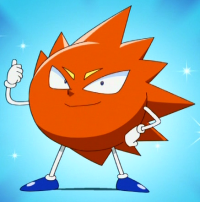 An orange shaped... sun... thing that leads a gang against the Hair Hunt Troops, he is "beaten" at his own game by Bo-bobo and since then became his sidekick, in destroying the empire. He's mostly a Butt-Monkey in the fights, but does manage to defeat some of his enemies on his own. He's arguably more of a Cloud Cuckoo Lander than Bo-bobo.

A boy from a village destroyed by the Hair Hunt Troops led by (Captain) Battleship, he joins Bo-bobo to both train and to avenge his hometown. While a competent fighter at first, he is soon demoted to the sidelines as the enemies grow out of his league. He and Beauty also develop a small mutual attraction to one another. He fights using the Fist of the Backwind.

When the manga ends, he decides to keep on training. Ultimately, a sticky situation forces him to join the Hair Hunt Troop, and he becomes the Neo-Maruhage Empire's Neo A-Block Commander in Shinsetsu Bobobo-bo Bo-bobo. Bo-bobo manages to defeat him, and he spends most of the time recovering in a hospital (and training more) until he returns to the group for good. At the end of Shinsetsu, he and Beauty are seen traveling together.

A mysterious man with a dollop of strawberry ice cream for a head (in the anime; in the manga, his head's a pile of feces). He was originally a Hair Hunter stationed at C-Block, where he was the guardian of the Aitsuhage Tower's Jet Black Room. He has the honor of being the first enemy to force Bo-bobo to be dead serious in combat.

After his defeat, he is convinced by Bo-bobo to help him defeat Captain Battleship, who's kidnapped Beauty. After that, he does nothing to aid the Rebels until they reach Hallelujah Land, where he helps in... one fight. After that, he does nothing till the Rebels reach Cyber City, where he has to fight his Evil Counterpart, J, to whom he loses to. He plays a larger role near the end of Part 1, where it's revealed that he is Beauty's older brother.

He returns in the sequel manga during the fight with Usui, but retains a minor role. 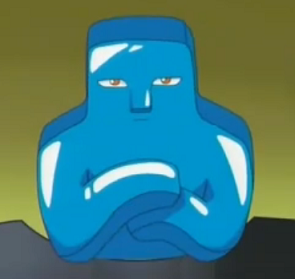 A being made entirely of blue, lychee-flavored jelly, the commander of the Chrome Dome Empire's A-Block, and the first series' second Arc Villain. Jiggler loses his position in the empire after becoming the first victim of Bo-bobo's Fusion Dance technique, and has since become the guinea pig of Bobobo's and Don Patch's impulsive behaviors. 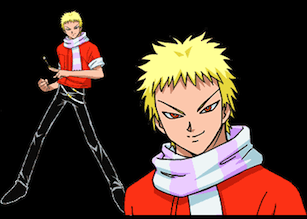 A blonde-haired man who's a member of the Wiggin Gang. He's Heel–Face Revolving Door personified, switching his allegiances so much that nobody knows where his true loyalties lie (other than with the Wiggin Gang). By the end of the first series, it's revealed his true loyalties lie in the Hair Kingdom, where he originally hails from and is a survivor of Bi-bibi's genocide.

He wields the Super Fist of the Key, allowing him to "lock" his opponents in place with a golden skeleton key. 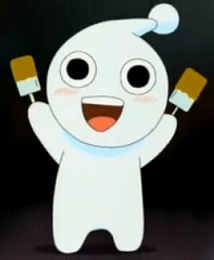 The former again not from a hundred years ago leader of the Z-Block Troops, after being beaten by Bobobo, his only major roles in the series is getting the gang out of a cage and his Fusion Dance with Bobobo.

An anime only character, he's the narrator of the series who often gets as Cloud Cuckoo Lander as the rest of the cast. 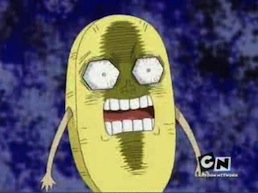 Voice By: Kimiko Saito (JP), Luis Vicente Ivars (Spain)
An anthropomorphic pickled daikon slice (a dill pickle slice in the anime's English dub), who has the honor of being the first example of how wacky this series is, appearing in the very first chapter and episode. He accompanied Beauty for no real reason and then dismissed by Bobobo when he asks to join them. Turns out to have been ordered by Bobobo to spy on Bibibi.
Suzu 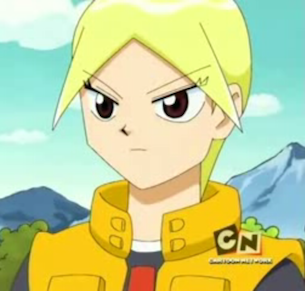 Battleship's former right hand lady until Bo-bobo defeats him. She assists Bobobo in the Halekulani arc only to not appear again till the final Tournament Arc of Part 1. 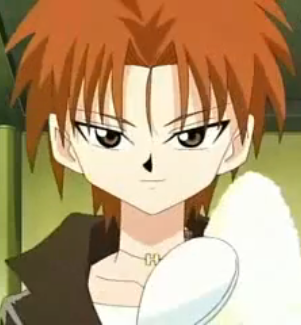 A former Hair Hunt Troop assassin who was also the former King of Wiggin Specialists until defeated by Bobobo. 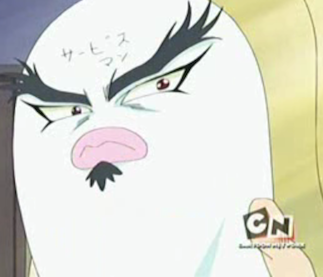 Like Suzu, he was a former agent of Battleship who helps the group out for no apparent reason. He's really nothing more than a public flasher, but he's treated often treated as being really powerful. 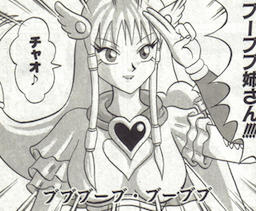 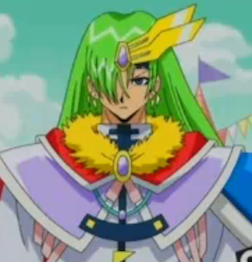 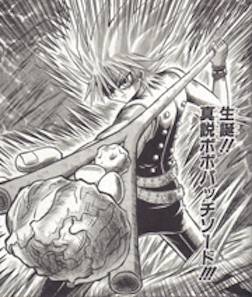 Shinsetsu Bobopatch
Voiced by: Hiroaki Miura (JP), Richard Epcar (EN), Jaime Roca (Spain)
A fusion between Bobobo and Don Patch. Unlike the people who make him up Bobopatch is cold, serious, and only desires to beat his foes as quickly and easily as possible!
Bobopatchjiggler (Bobopatchnosuke) 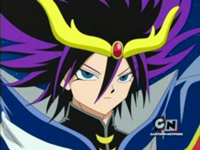 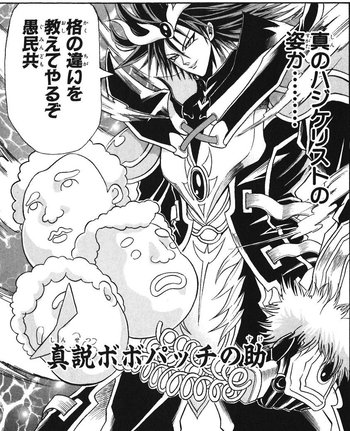 Shinsetsu Bobopatchjiggler
Voiced By: Hirofumi Tanaka (JP), Michael McConnohie (EN)
A fusion between Bobobo, Don Patch and Jelly Jiggler. A super serious fusion, even more serious than Bobopatch, and far stronger as well. With a single step the earth shakes and his Majide Time is a force to reckon with!
Denbo 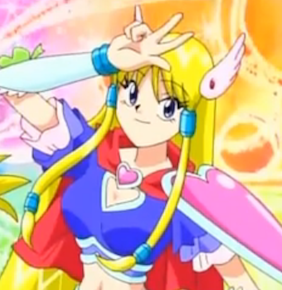 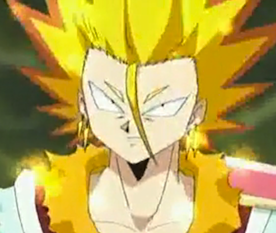 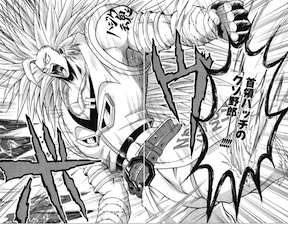 Papapa-pa Pa-papatch
Voiced By: Reiko Kiuchi (JP), Bryce Papenbrook (EN), Juan Navarro (Spain)
An alternate fusion of Don Patch and Bobobo. When beginning the technique, Don Patch messed with some buttons to try and have his name be first. The result is a brand new fusion.
Mr. Bojiggler (Tenbobo) 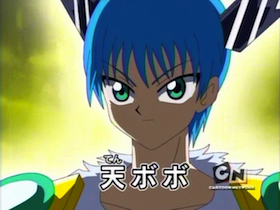 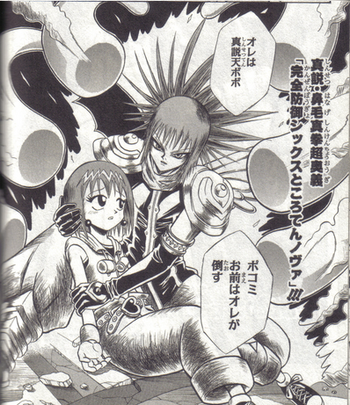 Shinsetsu Bojiggler
Voiced by: Ken Takeuchi (JP), Johnny Yong Bosch (EN), Emilio García (Spain)
A fusion between Bobobo and Jelly Jiggler. A peace-loving pretty boy all he wants is for everyone to get along... and he'll use more violence than necessary and then some to make it happen. Whether or not he's speaking the truth, he's one of the most violent fusions!
Kintenbo 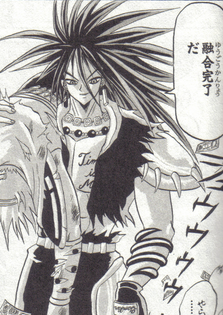 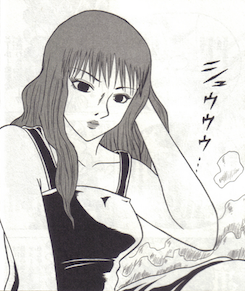 The other fusion of Bobobo and Don Patch as a result of fusing inside the "O" dimension. A serious and mature woman who's not quite as serious as she seems.
Torpedo Girbo 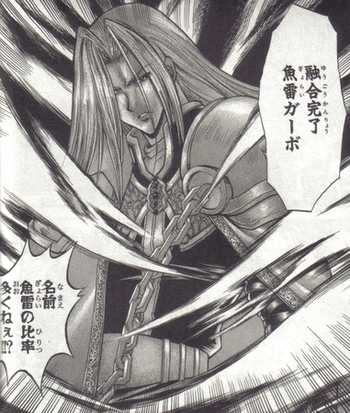 A fusion between Torpedo Girl and Bobobo. He seems really tough and is very handsome could he be strong enough to handle Bibibi-bi Bi-bibi's power? Nope.