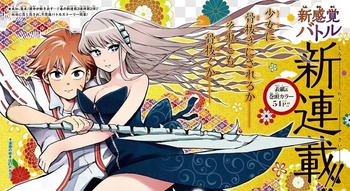 Bone Collection is a manga by Jun Kirarazaka published in Shonen Jump and localized by Viz Media from April 26, 2020. The manga was finished in August of 2020.

Yokai from the Yokai World invade the Human World. It is up to exorcists, humans with special skills, to defend it. Kazami Jinai is one such exorcist but has no talent for traditional methods. His only talent, to use power from yokai, is banned by other exorcists. One day he meets a girl who is a yokai who wishes to be human and would like for him to use his power to do so and she would help him with his exorcisms.