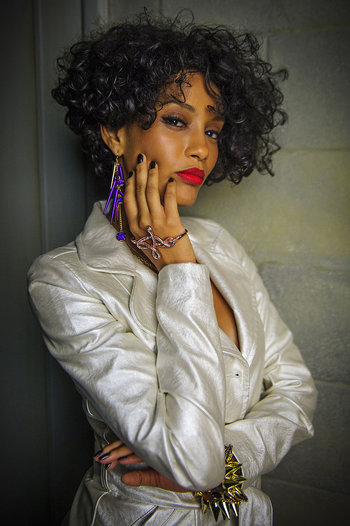 Her first prominent role on television was in 1996 as protagonist of the Brazilian telenovela Xica da Silva by Walcyr Carrasco, in the Rede Manchete. In 2004, she portrayed Preta in Da Cor do Pecado created by João Emanuel Carneiro and she played Ellen, comic antagonist in the telenovela Cobras & Lagartos in 2006. In 2009, she received her first protagonist in primetime of Globo, one of the Helenas created by Manoel Carlos in the telenovela Viver a Vida — making her the first black woman to star in a prime time telenovela.

In 2012, she played Maria da Penha in the telenovela Cheias de Charme, the fourth lead role in her career. Her fifth leading role was playing the journalist Verônica Monteiro in technology oriented television series Geração Brasil, as part of the main trio of the plot, alongside Cláudia Abreu and Murilo Benício.

As of 2015, she protagonizes the musical comedy television series Mister Brau opposite her husband Lázaro Ramos. Taís is still touring the country with the play O Topo da Montanha, which debuted in São Paulo in 2015 and earned her a nomination for the Shell Award for Best Actress. As a television host takes part in the program Saia Justa aired at the GNT network.

In 2016, an opinion poll (Pesquisa Qualibest) pointed out Taís Araújo as the woman most admired by young people between the ages of 13 and 20, the fifth most influential artist in television and internet in the country, according to the newspaper Meio & Message in partnership with Instituto Datafolha in 2016,[6] and the fourth most influential in 2017.

In 2017 she was elected one of the 100 most influential personalities of the world under 40 years of age by MIPAD, and for this reason she participated in a debate at Columbia University in New York. In 2015, in the matter of the English newspaper The Guardian on the series Mister Brau, the pair Taís Araújo and Lázaro Ramos was quoted like featured in the Brazilian television. Also was chosen one of the most warlike and stylish women by the American magazine Vogue. She and her husband Lázaro Ramos wer shortlisted out as the most powerful of the national showbizz, in the cover of Veja magazine published in March 2017. In 3 July 2017, she was appointed as the Defender of Rights of Black Women by UN Women Brazil, a United Nations entity for gender equality and women's empowerment.

In her personal life, she and her husband Lázaro Ramos have two children.