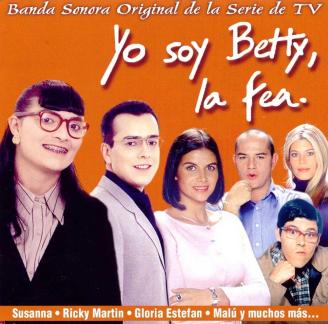 Literally: "I'm Betty, The Ugly One" (1999-2001). Probably the most famous Hispanic Soap Opera in the world, it is a Dramedy that also subverts the paradigm of the beautiful heroine by instead starring an ugly one. In Hispanic countries, everybody and their cat has watched it (the Mexican adaptation's finale was actually a real parade!).

Beatriz "Betty" Pinzón is a very intelligent woman in her late twenties, has a degree in Economics and a master in Finance, perfectly trilingual, and is extremely clever. She also is extremely unattractive, with any possible redeeming feature hidden under her unflattering clothes, her bad hair, her orthodontic treatment, her big nerdy glasses and her cringe-worthy laugh. Since she has been considered ugly since her birth, she has very little confidence in herself, and her parents being very overprotective doesn't help her with this at all. Her only friend is Nicolás Mora, a fellow neighbour and classmate, who is as unattractive and nerdy as she is.

Unable to find a job at the same level as her knowledge because her incredible resume is hidden by the photo attached to it, Betty lowers her expectations and applies to a secretarial job in a fashion company, Eco Moda, since they are the only company that doesn't require a photo. The Human Resources man instead hires Patricia Fernández, a very attractive lady; however, Patricia is the best friend of Marcela Valencia, the fiancée of the new president of the company, Armando Mendoza, and, suspecting that his very jealous fiancée wants to spy on him - and since he needs a competent aid - he hires Betty as well. After all, Patricia is a total airhead, and Betty has the plus of being unattractive. What Could Possibly Go Wrong?

Well, for a start, Betty falls in love with her boss.

Mind, Betty knows that her "Don Armando" will never notice anyone like her, and so she decides to instead demonstrate her love by being the best secretary possible, even if that means clashing with Patricia (who likes to think of herself as much more important than she is), with Marcela (who works in the company too, and knows Armando's personality too well), with the head designer Hugo Lombardi (a Flamboyant Gay who disliked Betty since Day One due to his very rigid concept of beauty), with Daniel Valencia (Marcela's brother, investor, and The Rival of Armando since childhood), and in general with... pretty much everyone. She endures a lot of mistreatment, including being shunted off to a closet as her office. Unexpectedly, she finds support and friendship in the secretaries of the company, dubbed "el cuartel de feas" (the Ugly Squad) by Lombardi.

Armando begins to trust more and more in Betty, who little by little influences in the policies of the company. To him, she is the hideous but trustworthy secretary, who also happens to know a lot of Economics. However Armando's very ambitious plans for the company begin to fall apart when the first collection of clothing produced under his administration fails badly, with the logical loss of money. Afraid of losing his position, his parent's trust and the company (in that order), he and Betty create a plan involving a takeover by a ghost company, and tax evasion. Then Armando's best friend and company vice-president Mario Calderón suggest to him that he should ensure Betty's loyalty by romancing her...