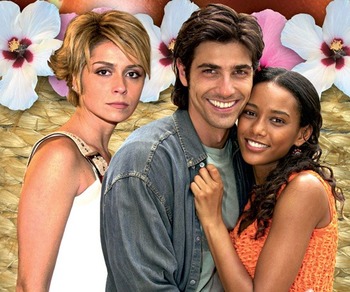 Da Cor do Pecado ("Shades of Sin") is a Brazilian telenovela produced and broadcast by Rede Globo in 2004.

It tells the story of Preta (Taís Araújo), a beautiful and poor black woman, who lives in São Luís and works at the local marketplace selling medicinal herbs. One day, she meets and falls in love with Paco (Reynaldo Gianecchini), a white botanist and son of the millionaire Afonso Lambertini (Lima Duarte). Paco also loves Preta, but is engaged to Bárbara (Giovanna Antonelli), a beautiful, racist and cruel woman who has a lover on the side, photographer Kaíke, and is only interested in Paco for his family's fortune. Bárbara devises a plan to make Paco believe that Preta has stolen his money, and while the plan eventually backfires, she comes up with a new strategy to drive Paco and Preta apart, joining forces with Dodô, Preta's ex-boyfriend, and drugging Preta into unconsciousness to make Paco believe she was in bed with Dodô. Paco also learns at the same time that Barbara has a lover and decides to break up with her, but is nonetheless led to believe that Preta was cheating on him. Bárbara manipulates Afonso and convinces him that Paco has lost his mind and should be admitted to an asylum. After a heated chase, Bárbara follows Paco into an helicopter, and with no other way out, he crashes the helicopter into the ocean.

It could end there, but Bárbara just so happens to be pregnant with Kaíke's child, passing it off as Paco's, and Preta herself finds out she's pregnant with Paco's child shortly after the accident. Eight years pass, and Preta remains in poverty as she lovingly raises her son Raí with the help of her best friend Helinho, who works as a fake "pai de santo", tricking people into believing he can communicate with the deceased. Meanwhile, in Rio, Bárbara remains in wealth, constantly abusing and belittling her own son Otávio while her relationship with Kaíke grows strained over their different points of view. Following her mother's death, Preta decides to head to Rio de Janeiro and introduce Raí to Afonso, and to convince him to recognize Raí as part of the family. Meanwhile, Bárbara is forced to marry unscrupulous Tony, who plans to steal Afonso's fortune and will do everything to prevent Preta from ruining his plans.

But there's still one last twist... Paco survived, having been rescued by Ulisses, the second-eldest of five siblings from a family of wrestlers, led by their tough but loving mother, Edilásia "Mamuska" Sardinha. Due to the striking resemblance between Paco and Ulisses' older brother Apolo, who also went missing at sea after an encounter with a group of gold smugglers, Paco ultimately agrees to live as Apolo for as long as he can, until he can find the courage to break it to Edilásia that Apolo is presumably dead.