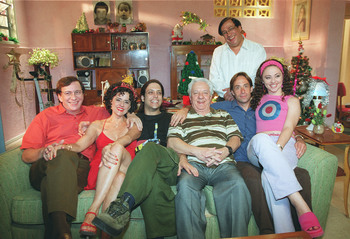 Essa família é muito unida...note It's the first line of the opening song and translates as "This family is very united"

A Grande Família (English: The Big Family) is a Brazilian television sitcom created by Oduvaldo Vianna Filho and Armando Costa which originally aired on Rede Globo from March 29, 2001 to September 11, 2014. The show tells the story of a typical middle-class family living in a suburb neighborhood of Rio de Janeiro. It is a remake of the series of the same name that aired in Brazil in the 1970s

The family consists of a working father, Lineu, a housewife and mother, Nenê, their son Tuco, their daughter Bebel, and Bebel's fiancée, Agostinho, a taxi driver portrayed as the typical carioca malandro. The family's grandfather, Floriano, was written out of the story after the death of actor Rogério Cardoso.

In addition to being the longest-running Brazilian sitcom, the show it is considered one of the most popular comedy shows in Brazil. A film based on the series premiered on January 10, 2007.

Lineu (Marco Nanini), the head of the family and quintessential patriarch, acts like a father to everyone in the house, including to his street-wise son-in-law, the hilarious Agostinho (Pedro Cardoso). Lineu is as methodical and strait-laced as Agostinho is roguish and full of mischief. Lineu is married to the sweet Nené (Marieta Severo), and unlike most long-married couples, they are still passionately in love.

Bebel (Guta Stresser) is their dreamer daughter whose head is constantly in the clouds. And, of course, she could only be married to Agostinho. This family couldn't be complete without the eternal teenager Tuco (Lúcio Mauro Filho), a real mommy's boy who doesn't get any breaks from his dad.

A Grande Família contains examples of the following tropes: