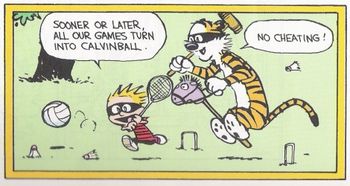 The score is still Q to 12!
"Other kids' games are such a bore!
They gotta have rules and they gotta keep score!
Calvinball is better by far!
It's never the same! It's always bizarre!
You never need a team or a referee!
You know that it's great, 'cause it's named after me!"
— Calvin and Hobbes
Advertisement:

Calvinball is a game which we see characters play but whose rules we don't know. In some instances the rules may even be unclear to the players or even get changed while the game is being played. This allows authors to create games that are absurdly silly, complicated, or arcane. Such games typically fall into these categories:

The key to Calvinball is that it allows the work to depict the game without having to take time out to describe it to the audience. It's particularly useful to show crazy or destructive characters wreaking mayhem in what looks to the audience like organized chaos. If any partial description is given, it's usually a list of Noodle Implements, and is often filled with Perfectly Cromulent Words.

If the basic rules are described to the audience in any way (or if the game already exists in Real Life) then it's not Calvinball. You may instead be dealing with The Points Mean Nothing (where the game is explained but the scoring is arbitrary); Moving the Goalposts (where the game is explained but characters try to change the rules to their own advantage); Gretzky Has the Ball (where the sport is real but the characters play it like Calvinball); Artistic License – Sports (where the sport is real but just inaccurately portrayed); Screw the Rules, I Have Plot! (where the fictional game is technically defined but inconsistently portrayed); or Gameplay Roulette (where the rules are defined, but the game itself unpredictably changes them on the players).

When a sport doesn't exist in real life, but has defined rules that could be followed, it's a Fictional Sport instead.

The Trope Namer is Calvin from Calvin and Hobbes, who has no patience for games with rules, as described in the page quote.

Alternative Title(s): Made Up Ruleset