Literature / Who's Afraid of Beowulf? 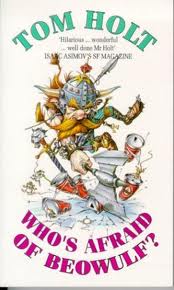 Who's Afraid of Beowulf? is a comic fantasy novel by Tom Holt.

Archaeologist Hildy Frederiksen has always wanted to make a major discovery, and an intact Viking ship burial certainly fits the bill. She most definitely does not expect the dead Vikings to come back to life, and is understandably rattled when they do.

It seems that a thousand years ago, King Rolf Earthstar of Caithness ('God-forsaken place but it is my Kingdom') and his band of heroes fought a dreadful battle with the evil Sorcerer King. They won the battle but lost track of their enemy, and so found it necessary to do a 'King Arthur'; that is, put themselves into an enchanted sleep to wake when they are needed to destroy the Sorcerer King once and for all. Thus Hildy finds herself the dazed and bewildered guide to an unflappable King Rolf and his bickering band of heroes as they make their way southward to confront the enemy in his new stronghold, London.