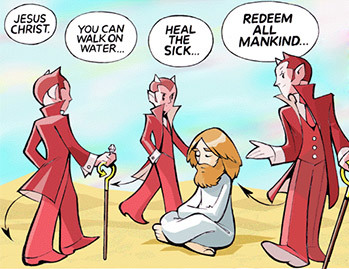 While a foe is Monologuing, they'll be circling the hero like a wolf circles a lamb, hoping to ensnare the hero with their arguments and offers like a python hugs its victims. Spiraling ever inwards as their Creepy Monotone reaches deeper and deeper to the core of the hero's motivation. The hero will usually have the facial expression of a deer in the headlights of an eighteen wheeler, or seem deeply conflicted, confused, or about to have a nervous breakdown. This is made all the creepier when the hero is bound and can't turn to face the villain, as they go behind the hero, monologuing the hero's flaws and how easily they could backstab them, or will if it's a Just Between You and Me moment.

It's rare, but sometimes the hero will do this. In this case, the hero usually isn't the ideological predator, but a flexible thinker, offering a Last-Second Chance while the villain remains dead set in their ways, immovable and proud before their impending fall. Some examples are both of these at once, where the hero and villain circle each other while trying to convert each other.