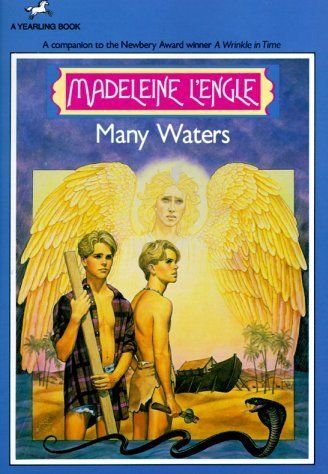 Many Waters is the fourth of Madeleine L'Engle's Time Quintet books to be published, but the third chronologically. It is the only one to focus on the Murry twins, Sandy and Dennys. After an accident in their parents' lab, they are transported back to ancient times, where 4-foot-tall humans coexist with mammoths and seraphim. They are saved from certain death in the desert by a young man named Japheth and his family, headed by stern patriarch Noah (yes, that Noah). Stuck in the ancient desert for now, Sandy and Dennys adapt to their harsh environment.

For the inhabitants of the oasis, the twins' arrival is just the beginning of many changes. Noah receives messages from the being "El" that troubled times lie ahead, including a great flood. Sandy and Dennys have to find a way back to the present before "many waters" flood the desert.

Preceded by A Swiftly Tilting Planet Followed by An Acceptable Time

Tropes contained in this work: