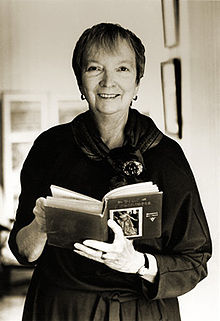 “A book, too, can be a star, a living fire to lighten the darkness, leading out into the expanding universe.”
"You have to write the book that wants to be written. And if the book will be too difficult for grown-ups, then you write it for children."
Advertisement:

Madeleine L'Engle (née Camp, November 29, 1918 – September 6, 2007) was an American writer of Young Adult Literature best-known for A Wrinkle in Time and its sequels.

Most of her novels belong to one of two sequences, referred to as "Kairos" and "Chronos", from the two ancient Greek words for time. "Chronos" refers to chronological or sequential time, while "Kairos" signifies a time in between, a moment of indeterminate time in which something special happens. (Although both sequences contain speculative elements, the Chronos sequence is primarily realistic, while the Kairos sequence, which includes A Wrinkle in Time, is clearly sf/fantasy.)