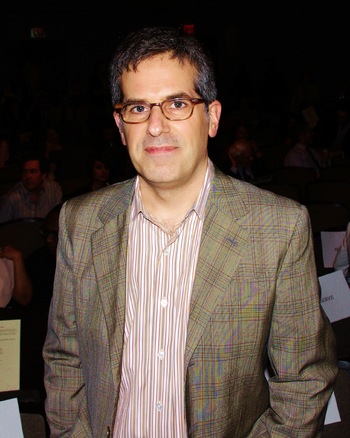 Jonathan Allen Lethem (born February 19, 1964) is an American author and essayist known for his eccentric, Genre-Busting works. He burst onto the scene with his Nebula-nominated first novel, Gun, with Occasional Music, which deconstructed the Hardboiled Detective in a surreal futuristic setting. He broke out into mainstream recognition with the novel Motherless Brooklyn, about a gangster with Tourette's Syndrome. He has written a wide variety of other works, ranging from a series of interviews with Bob Dylan to a study of the Talking Heads album Fear of Music to a reboot of the Marvel Comic, Omega the Unknown.