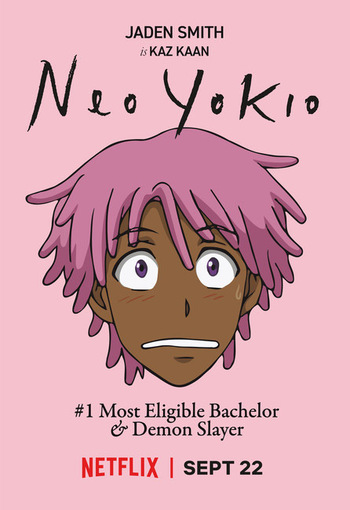 Neo Yokio is a Japanese-American animated series that premiered on Netflix on September 22, 2017, created by Ezra Koenig. The series follows the daily life of Kaz Kaan (Jaden Smith), a "magistocrat" who lives in the titular city of Neo Yokio. More than a century ago, Kaz's ancestors were summoned to Neo Yokio to quell a sudden uprising of demonic energy that threatened to bring the city to its knees. Their descendants continued to protect the city, many of them joining the ranks of high society in the process.

Kaz is the latest in a long line of magic users, reluctantly upholding the family legacy of demon hunting. He would prefer to dedicate his time to fashion, field hockey, and staying in the top spot on the Neo Yokio bachelor board, but his Aunt Agatha (Susan Sarandon) conspires to keep him employed. At her behest, Kaz takes up work performing various magical tasks— exorcisms, demon slaying, et cetera— that keep the city from being overrun by malignant occult forces.

Alongside his robotic butler Charles (Jude Law), best friends Lexy and Gottlieb, arch-rival Arcangelo Corelli, and disaffected fashion-blogging former flame Helena St. Tessero, Kaz will have to juggle both his high society image and an increase in demonic activity that could threaten Neo Yokio once again.