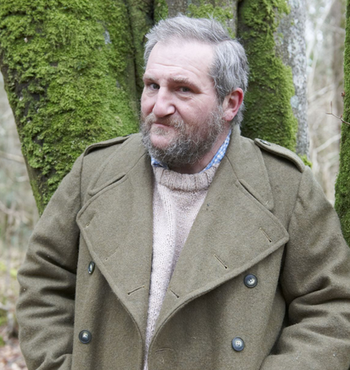 Thomas Charles Louis "Tom" Holt (born 13 September 1961) is a British author whose works can be described as comic urban fantasy mixed with Fractured Fairy Tales. Most of his books are standalone, but he has a short series centering around J.W. Wells & Co. (named after the sorcerer in the Gilbert and Sullivan musical The Sorcerer).
Advertisement:

Holt's male protagonists are nearly all nerds with little social sense, and his female characters tend to be rock-hard, super-competent steamrollers (though they do tend be less competent if they are the actual protagonist rather than the love interest or other supporting character.) Holt's works often deal with the theme of love, though he's very cynical about it and often protrays it as an annoyance or even a disease (either because the subject knows he'll never get anywhere with his crushes, or because she's so desirable she's no longer interested).

Many of his works deconstruct mythology from various cultures, or shove them into a modern setting and let them rip. He has several crossover characters, such as conspiracy theorist/reporter Danny Bennett and monster hunter Kurt Lundqvist.

His writing style is fast and entertaining, and is peppered with plays on cliches and idioms, often taking an idea in a common set of words and turning them Up to Eleven. His plots are heavily powered by the Rule of Funny and sometimes end in a jumble full of Plot Holes - but funny Plot Holes.

Holt has also written several historical novels (as Thomas Holt), and two sequels to E. F. Benson's Mapp and Lucia series. In 2015, it was revealed that he also writes fantasy novels in a very different writing style under the name of K. J. Parker.