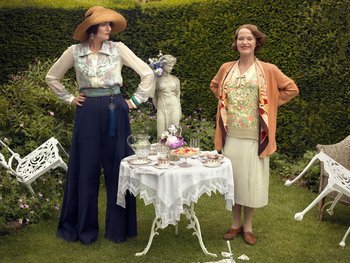 The Mapp and Lucia novels (also known as the Make Way for Lucia series) are a series of social comedies published by E.F. Benson from 1920 to 1939. They detail the rise of wealthy English socialite Mrs. Emmeline Lucas (known to her friends as Lucia) as she dominates the social landscape in the town of Riseholme (and, in the later novels, Tilling).

The first novel, Queen Lucia (1920), set in Riseholme, introduces the characters of Lucia and her right-hand man, Georgie Pillson.

The second novel, Miss Mapp (1922) pivots away from Lucia and introduces Miss Elizabeth Mapp (Lucia's eventual arch-nemesis) and her social circle in the town of Tilling.

The third novel, Lucia in London (1927) returns its focus to Lucia as she takes up temporary residence in a fashionable London house for the summer season.

The fourth through sixth novels, Mapp and Lucia (1931), Lucia's Progress (1935), and Trouble for Lucia (1939) see Lucia (along with Georgie) moving to Tilling and facing off against Miss Mapp.

The three final books of the series were adapted for television by Channel 4 in 1985, starring Geraldine Mc Ewan as Lucia, Prunella Scales as Mapp, and Nigel Hawthorne as Georgie.

A three-part television adaptation of the fourth novel aired on BBC TV in December of 2014. It starred Anna Chancellor as Lucia, Miranda Richardson as Mapp, and Steve Pemberton (who wrote the adaptaion) as Georgie.

The series has inspired a number of spin-off novels written by other authors as well as two radio adaptations.

Mapp and Lucia contains examples of: