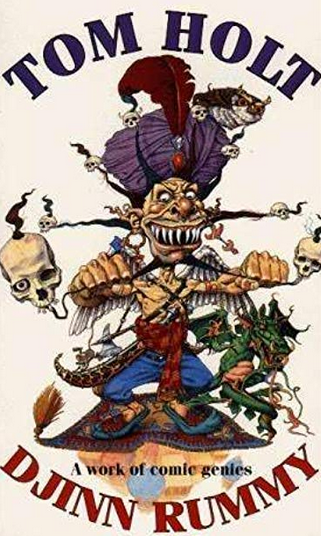 Inside an aspirin bottle, nobody can hear you scream...

Djinn Rummy is a comic fantasy novel by Tom Holt, written in 1995.

All Jane Wellesley wanted was to peacefully overdose on some expired aspirin so she could end her life in a British Rail waiting room. Alas, the bottle she chose to open, instead of aspirin, contained an authentic Genie. Now, instead of suicide, she has a life of infinite possibilities to contemplate. Lucky old Jane.

Lucky old Genie, too- because Kiss (short for Kawauchiya Integrated Circuits III- it's a corporate sponsorship deal) would rather be doing other things. Not least of which is saving the world from his old friend Philly Nine, another Genie, who has decided that the best way to avoid being indentured to humans is to kill them all...